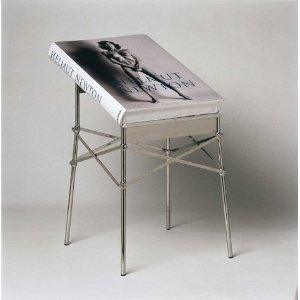 A titanic book in every respect, SUMO is a tribute to the 20th century’s most influential, intriguing and controversial photographer, Helmut Newton.

SUMO is a truly unique publication. SUMO, edited by June Newton, features a wide selection of over 400 pictures, some of which are published for the first time, covering every aspect of Newton’s outstanding career in photography; from his stunning fashion photographs, which pointed the way for generations of photographers, to his most recent celebrity portraits.

In defiance of the much-loved Japanese discipline which inspired the title of this colossal work, there is no need for its proud owner to wrestle with SUMO.

Philippe Starck has designed a unique device for displaying the book at home.

SUMO will be available to all Newton fans and photo devotees in a limited edition of 10,000 copies, all numbered and signed by the artist.

As the production is highly complicated and each individual book is bound by hand; an initial print run of 2,500 copies will be available at the end of 1999, with a strictly limited quantity allocated to each country.

The remaining copies will follow by April 2000.When you fix your gaze on SUMO for the first time, you will surely ask yourself, like Helmut Newton, "How is it possible? And for only Â¤1,000?"

Helmut Newton’s SUMO published by TASCHEN has been judged the Best Book on Photography Published in 1999 by world-renowned International Center of Photography.

SUMO, the biggest and most costly book ever produced, was judged best in a field of outstanding photography books published in the last year of the 20th century. Conceived as a monumental tribute to Helmut Newton, arguably the most influential and controversial of contemporary photographers, SUMO has become a star in its own right by winning this honor in a field filled with worthy books devoted to photography." 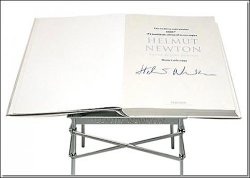