Eye to I: The Autobiography of a Photographer

Eye to I: The Autobiography of a Photographer, de Erwin Blumenfeld, Mike Mitchell, Brian Murdoch 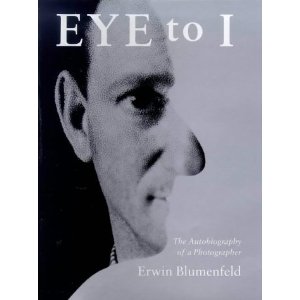 informations pratiques : Eye to I: The Autobiography of a Photographer

Although Erwin Blumenfeld would no doubt have emphatically denied it, his autobiography might be seen as an example of the trajectory of an artistic life brutally fashioned by the vicissitudes of 20th-century European history. Born in 1896 into a bourgeois Berlin Jewish family, he served in the German army during World War I, was linked to the Berlin dada coterie, and was interned in France in World War II, all before finally immigrating to America and finding eventual acclaim as one of this century’s great photographers. Such a bald summary actually does this book a disservice. Avoiding the self-justifications and stage-managed chronologies of the typical autobiography, Blumenfeld’s story is a witty and linguistically exuberant delight, abounding in puns and narrative passages that rival the work of many professional writers. Eye to I is merciless in its treatment of the author himself—chance and accident guide Blumenfeld far more than heroics or judgment, to which his account of the series of brutal internments in French concentration camps attests. But then again, it is precisely this attitude that helps him survive: the 20th century was not made for the rational, and Blumenfeld’s irony and ridicule is perversely a mark of the utmost sanity. Berlin dada, only fleetingly mentioned, must have helped hone these weapons—the only ones that an artist like him could wield. Blumenfeld proved himself as quirky and original a prose writer as he was a photographer; this beautifully translated book with its too-brief selection of extraordinary images (including an astonishing 1933 photomontage of Hitler) is a marvelous testament to a life and to art vigorously and joyously made.

The late fashion photographer’s work for Harper’s Bazaar and Vogue Aurbane photos that were the "New Yorkiest" of New York Awere created in spite of the meddling and conniving of "hideous" and "nasty" art directors and fashion editors. Or so Blumenfeld (1896-1969) would have us believe in this caustic, vigorously sardonic memoir, first published in Germany in 1976. It’s a raucous narrative, rich with beguiling tall tales, narrow escapes and praise for some of the kinder denizens of the demimonde. The ability to survive and even flourish in hostile environments is Blumenfeld’s recurrent theme, but these struggles unfold mostly in the classrooms and parlors of turn-of-the-century Berlin and the battlefields and concentration camps of the world wars. Unsparing humor and a compelling sense of the absurd invigorate Blumenfeld’s tales of WWI, when he was pressed into service as an ambulance driver (he was the only survivor when, "driving with neither lights nor experience," his loaded "Corpse-Carrier" overturned). He was also the bookkeeper of Field Brothel No. 209 (in service of a unit diagnosed as "one hundred percent syphilitic"Aattributable, perhaps, to the practice of recycling hard-to-find condoms); a go-between for an amorous nun and priest; and a French tutor to an obtuse sergeant (who when hiring Blumenfeld awarded him the Iron Cross). His reminiscences about his brutal internment in a French concentration camp during WWII unleash some of his most vitriolic and hilarious rhetoric, not only at Hitler (the "idol of lavatory manufacturers" whose likeness, superimposed on a crystal skull, was the author’s first celebrated photograph) but also at the French collaborators, in whose pestilential camps the photographer was imprisoned. Illustrations.